Magnificent Milestones – Why My Toddler’s Firsts Mean So Much 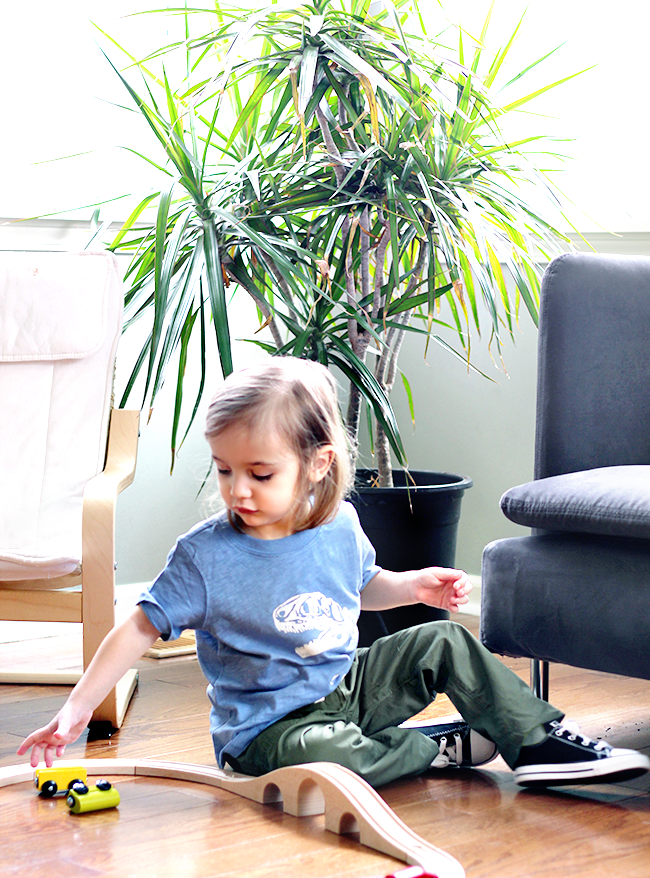 This post is sponsored by Everywhere Agency on behalf of Carter’s; however, all thoughts and opinions expressed are my own.

When my son Emmett was born in January of 2016, I had absolutely no idea just how profoundly the milestones he achieved as a toddler would affect me. Throughout his sister Essley’s first year (she was my first babe and is now four), I obsessively researched baby milestones, and she hit all of them at what is considered to be on track or early. I assumed Emmett would be the same way. And then, at seven months old, he was diagnosed with Infantile Spasms, the most catastrophic form of childhood epilepsy. Most children with IS go on to have severe developmental delays. And while Emmett is one of the rare few who “beat” IS – he responded quickly to medication, is one year and seven months seizure free, and has been repeatedly assessed as developmentally on track – every little thing new he does, milestone or otherwise, brings us such joy and a deep sense of gratitude. Many of you have little ones in your lives as well, and regardless of whether you’ve had unique challenges like we have or a very typical experience with your babes’ development, I know you can relate to the emotions that “firsts” trigger in us as parents. In many ways, we grow right along with our children. So today I thought I’d share some of Emmett’s recent magnificent milestones (what his big sister Essley calls it when he does something new), and a little more on why they make me so, so happy. 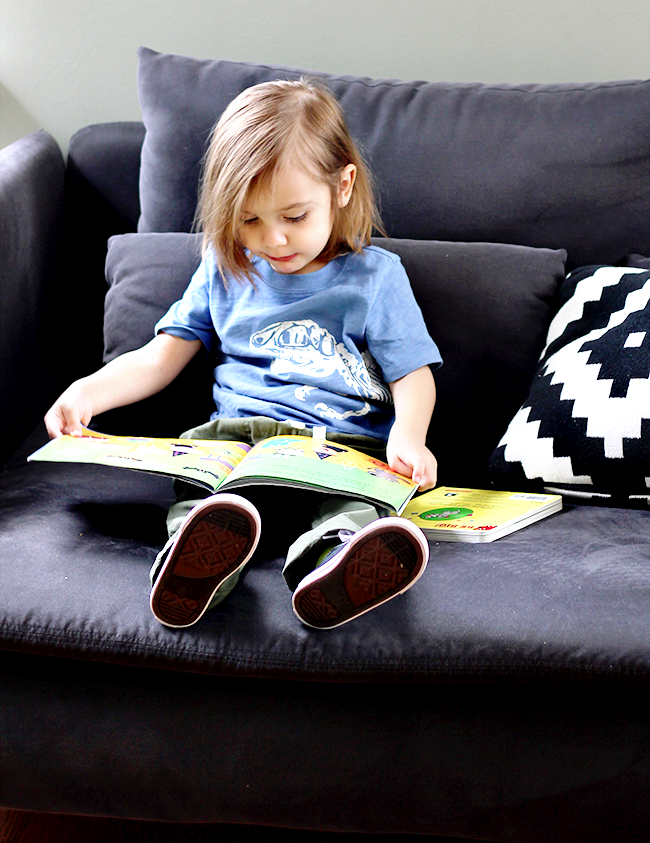 Now that the baby “firsts” (first tooth, first solid food, first time crawling, first steps, etc.) have all been met and Emmett is in full toddler mode, the biggest developmental milestone for us is speech. While Emmett has been assessed as on track (and even ahead) developmentally in most areas, his speech, while not technically delayed, has always come in a couple of month behind his age. He is actually in speech therapy now twice a month, so we work a lot with him on repetition, short sentences, etc. He has really taken off over the last two weeks with stringing words into sentences, which has been a huge goal. (I have tears in my eyes even typing it out!) I especially love when he pretends to read books, and makes his little two word sentences along with long sentences of made up word full of the most daring inflections. I could sit there and listen to him for hours. Watching Emmett progress with his speech brings me a great sense of pride, as he’s worked so hard. It kind of feels like a miracle. 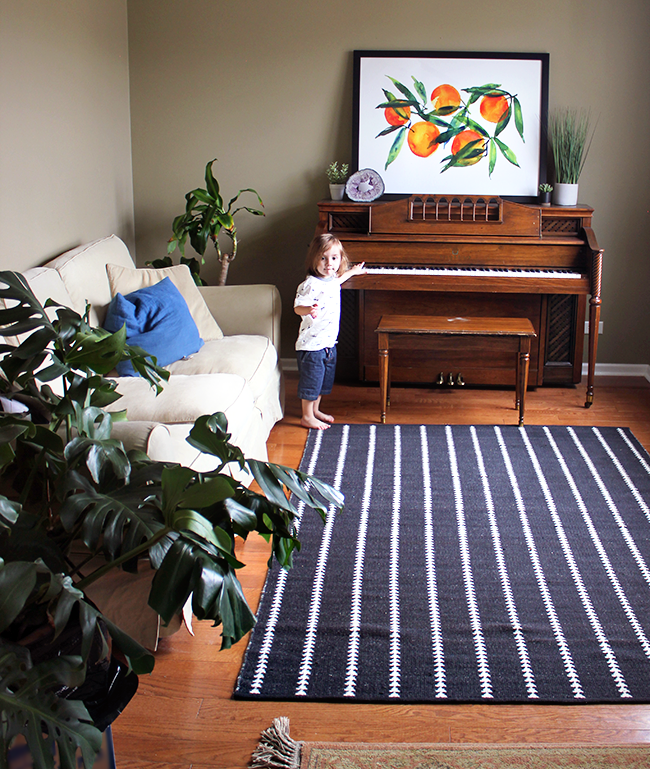 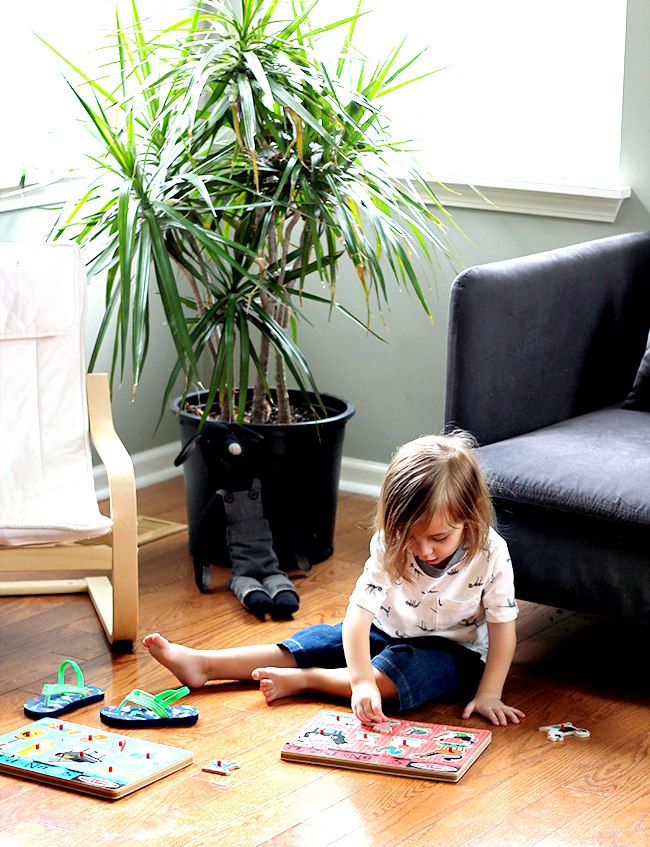 Emmett has also recently started counting everything (he can make it to 12, but sometimes prefers to leave out 7 and 9). His new favorite activity is playing his own special version of hide and seek, where he counts even when he is the one hiding (which is always in the same spot of our living room, right by the piano). He also loves to count each puzzle piece as he places it into a puzzle. It makes my heart so full of joy you guys. Truly. When I think back to being in the hospital with Emmett after we got the news of his epilepsy diagnosis and reading about how he would likely never even say one number, much less know how to count, I feel overcome with gratitude. It’s incredible. 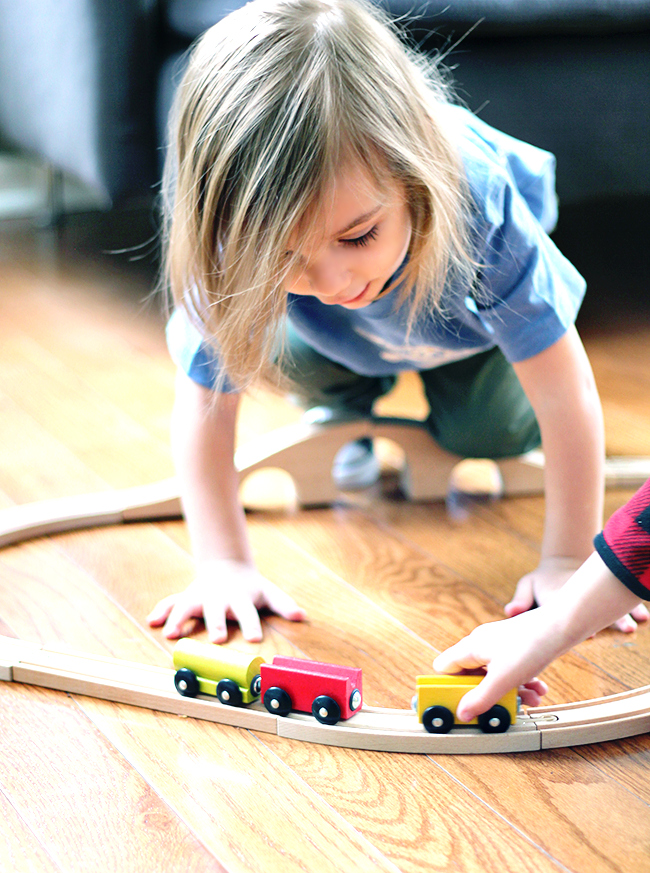 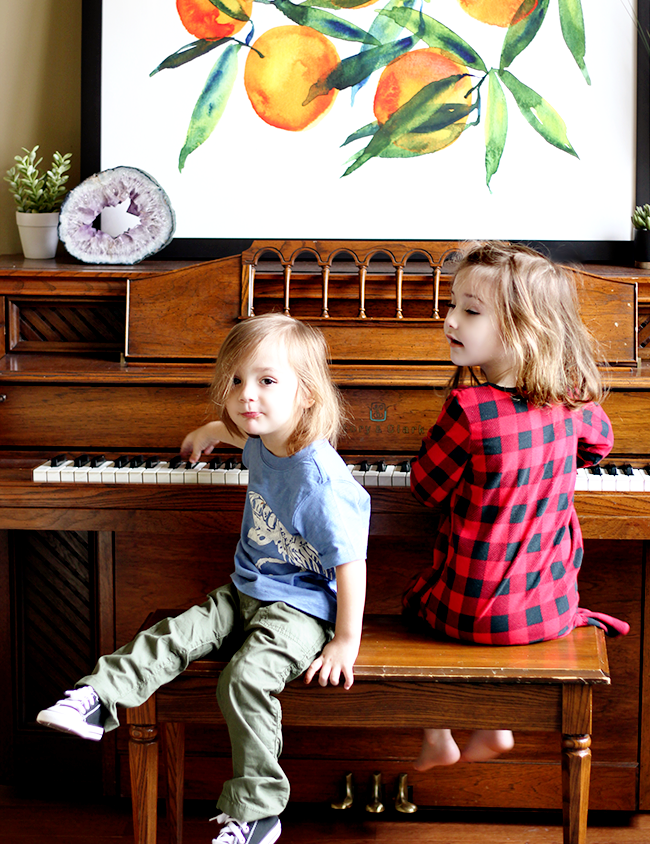 Another milestone that has brought me such happiness is seeing Emmett move on from the parallel play stage to really socializing with other kids. He loves playing with his big sister more than anything, and watching them become best friends allows me to see our family in a new, remarkable way. When we’re at the park or one of Essley’s activities and he sees another toddler, he immediately runs up to them and initiates play. Once again I think back to our early days of his diagnosis and the uncertainty of his future in terms of social interaction, and I feel so thankful when I see him connect with others. 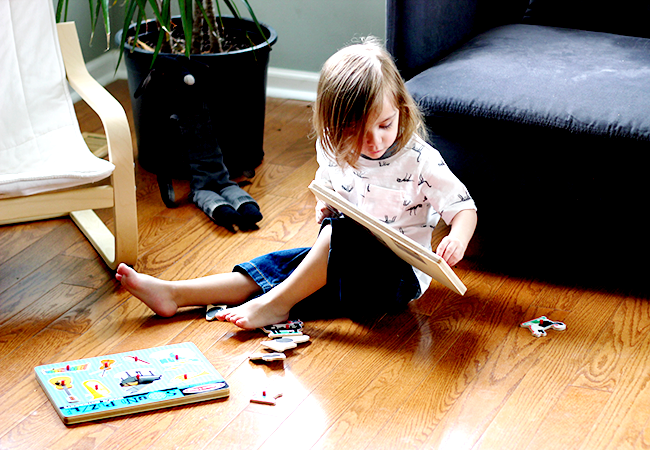 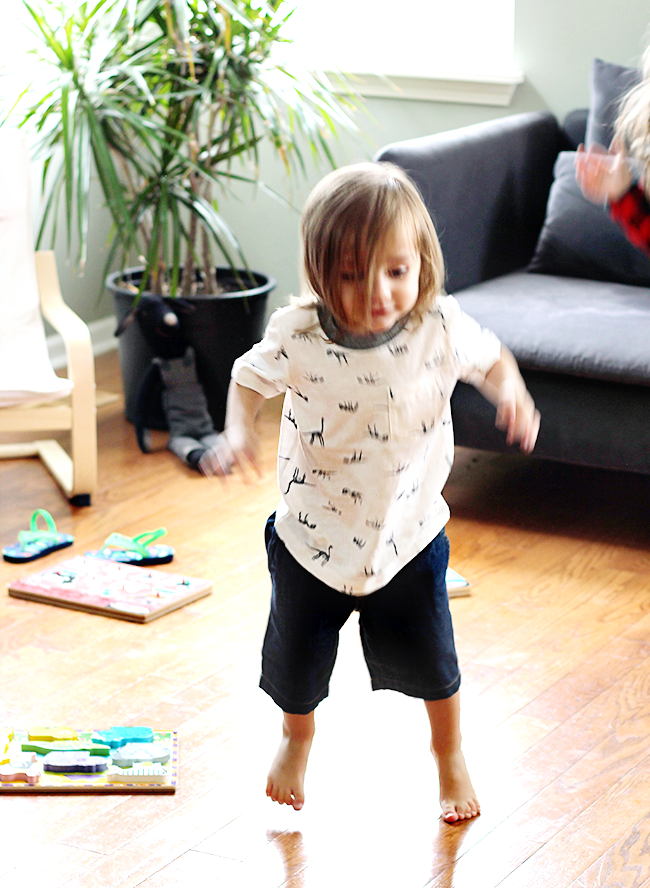 Emmett has also taken on a new love for performing, especially dancing, which is pretty freaking fantastic to watch. His sister has been taking dance since she was 18 months old and often practices at home, and now Emmett has to participate too, every time. He recently learned to jump with both feet and is quite proud of himself, so he incorporates that into his sweet dance moves. I hope the unique qualities he brings to his dancing continue into his life as he grows. It brings me such joy to see him developing a personality and his own little quirks that make him him. 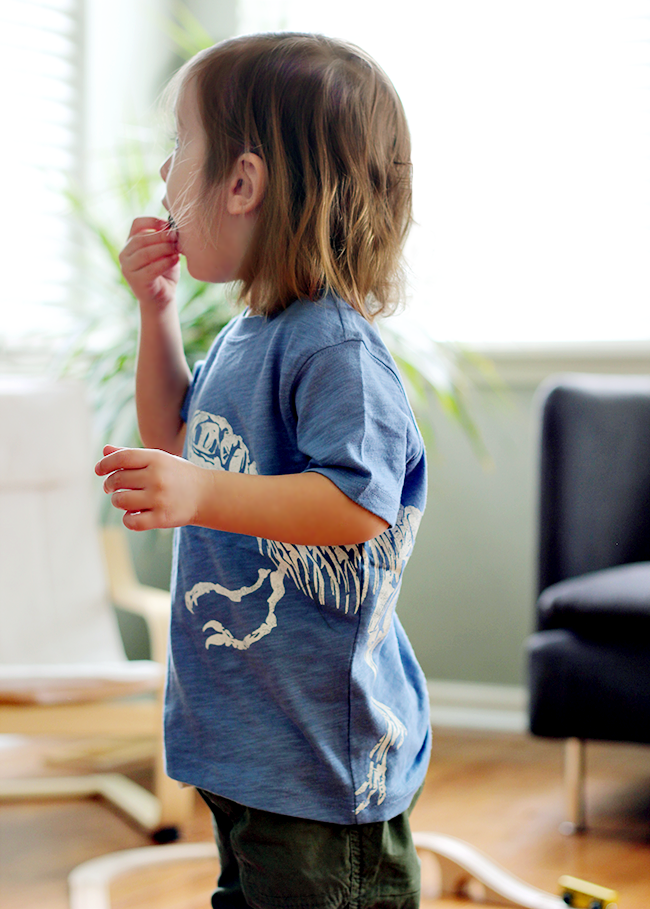 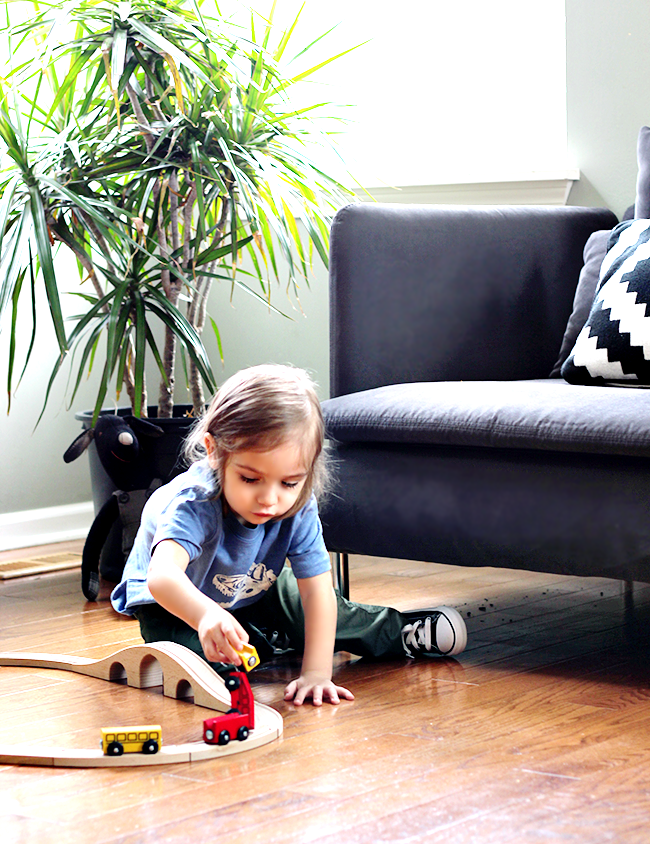 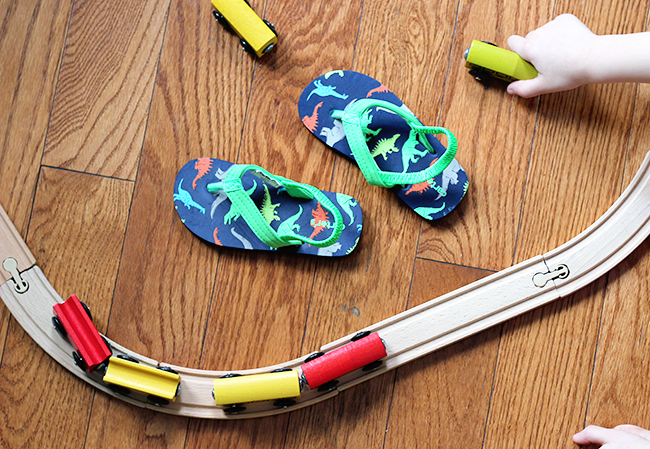 Emmett is also starting to follow in his big sister’s footsteps in terms of a desire to pick out his own clothes each day. (He even – albeit awkwardly – attempt to dress himself!) His taste in fashion isn’t quite as eclectic as Essley’s, but he knows what he likes. And if there is a dinosaur on it, that’s what he wants to wear. His current favorites are this blue jersey slub tee and this pocket tee from Carter’s – both featuring dinosaurs of course. I love pairing them both with these super cute and comfy pull-on poplin pants and denim dock shorts, and can’t wait for it to get warm enough for him to wear these flip-flops on the daily! We’re big Carter’s fans in this house. (Essley is wearing her favorite nightgown in the piano picture above, also from Carter’s, and you can see them in their matching PJ sets from this past holiday season below.) Carter’s has been with us from the start, honestly – some of the first baby gifts I received when I got pregnant with Essley back in 2013 were Carter’s baby clothes – and has been a part of our milestone journeys with both babes. I have so many pictures on my phone’s camera roll with the kids wearing Carter’s clothes. And their new video, With You From the Start, gave me all the feels – because it’s so true. 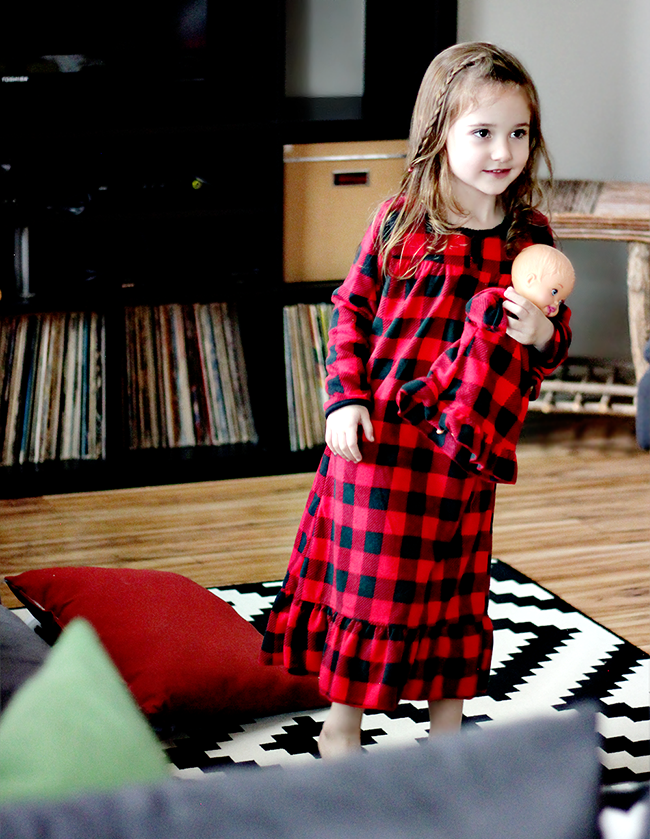 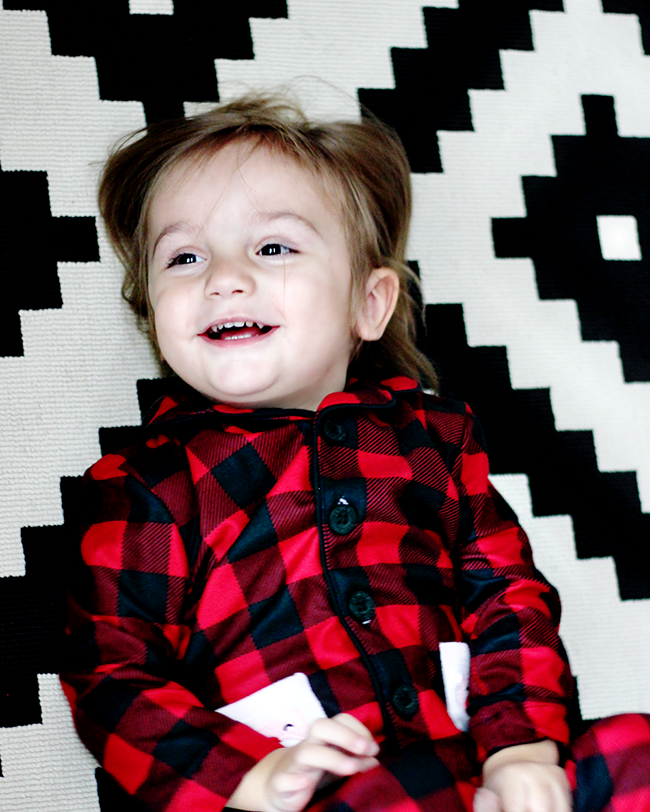 Watching Emmett progress through his own magnificent milestones has been – and continues to be – such an intensely wonderful experience for me. Each new thing he does as he grows genuinely makes me grow too, as a parent and as a human being. He and his sister are truly my hearts. I am so grateful for them, and every single experience that comes with them.

If you are a parent, and aunt/uncle, a grandparents, or have special kids in your life, I would love to hear more about your little ones’ magnificent milestones and what they’ve meant to you!