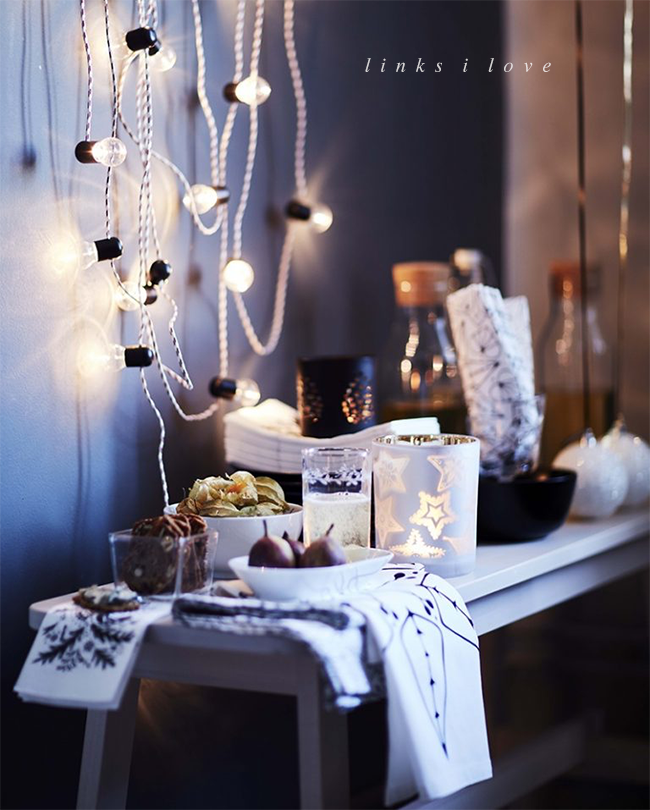 I just realized I haven’t done a Links I Love post since the beginning of July. Most of the “free time” (because we all have so much of that, right?) I spent online in the months that followed was admittedly researching Emmett’s illness, and those late night nursing sessions I used to spend aimlessly perusing the internet have become shorter and less frequent as little dude has gotten older. The time change this week though, while creating a darkness that begins at 4:30 which is basically this summer girl’s own personal hell, has messed with the kids enough that they’re falling asleep earlier at night. That also means that Emmett now wakes up ready for the day at 5:30 AM, but it allows me a little more down time at night to cram in Netflix with Robbie and (finally getting to the point here) come across pieces of awesomeness like you will see below. Here are these week’s favorites links and finds:

IKEA can basically do no wrong in my book, but their Winter Holiday collection (seen in image above) is above and beyond. I want it all.

Destiny’s Child reunited for the Mannequin Challenge and it was glorious.

For those who, like me, are having a hard time emotionally with the election results, this post on how to take action, donate, and help from Man Repeller made me feel like I could actually do something positive rather than just sit here in a pile of doughnuts ugly crying.

While there are times that I feel like Essley’s behavior is borderline teenager (so. much. attitude.), my kids technically have a while to go before they get there. So I guess that gives me some time to prepare (and cross my fingers that they aren’t as rebellious as their parents were). I found this article on what’s going on inside the teen brain incredibly interesting.

We’ve been doing a Friendsgiving celebration with a big group of pals for 4 years now, and I’m so looking forward to this year (coming up on Thursday!). Ours aren’t quite as pretty as Elsie and Emma’s, but I still love looking at theirs each year for inspiration.

15 hilarious examples that show why letter spacing is important.

Any of you who have children (or know a child) who suffers from or has suffered from seizures will be able to relate on some level to this beautiful piece written by my friend Lauren about her daughter Nora’s seizure journey. One of the seizure types Nora has had to face is the same one with which Emmett was diagnosed (and also one of the most, if not the most, damaging and catastrophic), Infantile Spasms. Awareness and understanding are so important. Please read if you can.

These luxurious red velvet jeans from Madewell are EVERYTHING.

You guys, there is a Ned Flanders-inspired heavy metal band called Okilly Dokilly and they just released their first music video. Brilliant.

I need to make this pumpkin pie green smoothie immediately.

I hope you enjoy the rest of your Friday and your weekend, friends! See you Monday.