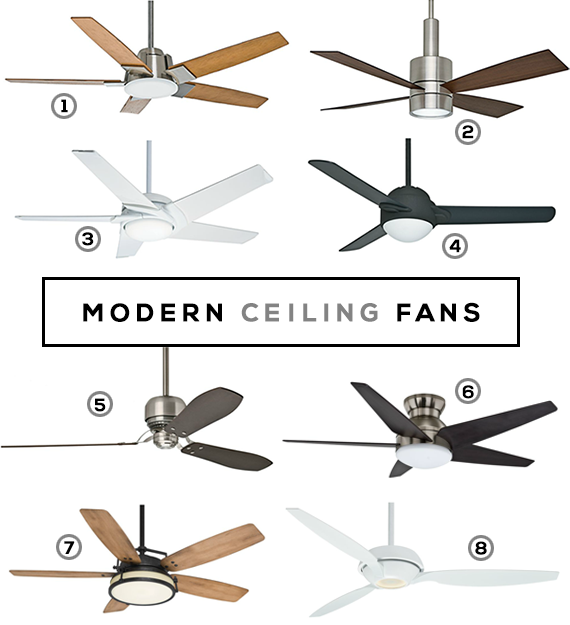 As I type this, I’m realizing that I’ve been posting a lot of home improvement type posts recently. I did one on bathroom vanities, one on fall patio furniture, I have one coming up about kitchen remodeling, and now I’m sharing my favorite ceiling fans. Phew. Looking back, I did a lot of home improvement projects last year around this time. We replaced our carpeting with wood flooring, we repainted and rearranged several rooms, and I transformed our guest bedroom into a nursery (I swear one of these days I’ll get around to sharing pictures of that!).  At the time, I just assumed that the overwhelming urge to work on things around the house was a result of me being pregnant (nesting is real, guys), but now I’m thinking that maybe early fall is some sort of subtle room makeover motivator for me.  And it makes sense – when winter is a few months away, and you’re going to be spending more time at home and indoors, your mind is bound to be more focused on creating a nice space than it might be during other times of the year.

Now that I’ve gotten my deep thoughts/theories out of the way as to why fall is a good time to work on homes, let’s focus on the real topic of this post: ceiling fans.  For years, we’ve talked about installing a ceiling fan in our bedroom. It has an A-frame style ceiling with a lone light bulb type ‘fixture’ (if you want to call it that) stuck right at the top. It’s not very nice to look at, but I think we’ve been staring at it for so long that we’ve just blocked it out. When our baby girl was a newborn, she thought that ceiling fans were basically the coolest thing ever, and we joked that maybe we should finally remove the hideous lightbulb and install a fan in our bedroom for her to stare at. Eventually the joking led to the realization that putting in a fan was actually a pretty good idea. Fall home project #1, here we come.

I ended up spending quite a bit of time looking at ceiling fans – different styles, colors, and types – and the ones you see above were on my final list.  All are fairly modern design wise, which I’m sure comes as a big shock to those of you who read here often (eyes rolled).  Ultimately, I decided to go with #1, the Zudio from Casablanca. I love the simple, contemporary design and the way that the brushed nickel looks against the wood.  And although it’s minimalist and modern, I think it’s still warm enough to avoid looking too sterile. I’m confident that it will improve the look of the entire room. I also love the fact that it has a high end, Energy Star approved motor with a lifetime warranty.  It’s on its way to me now (woot!) and once we get it installed, I’ll share some before and after shots on my social media channels.

Before I go, I also want to mention that September 18th happens to be National Ceiling Fan Day (yep, it’s a thing).  Our pals over at Casablanca Fan Company have put together a cool ‘Room Refresh’ giveaway in honor of this, and will be awarding one lucky fan a room refresh, adorned with the Casablanca Fan of his/her choice and a new coat of paint for the entire room.  Pretty great, huh? Casablanca has invited all of their Facebook and Twitter followers to submit a photo of the room they would like to be refreshed, and an explanation of what a room refresh would mean to them.  If you’re in the market for a new ceiling fan like I was (and a new paint job too!), it’s definitely worth taking a few minutes to enter.

Stay tuned to my Twitter/Facebook/Instagram accounts later this month for our before and after! Also, I’ve never installed a ceiling fan myself and the high, angled ceiling could be a little tricky – so if you have any tips, I’m all ears.

This post was in collaboration with Casablanca Fan Company.